Reduce frown lines and wrinkles around the eyes and forehead. Learn more about other areas available at your consultation. Dysport has been popular in Europe and now is available for consumers in the US.

How does Dysport really work?

Over time, the muscles above and between the eyebrows repeatedly contract and tighten, causing wrinkles. But, with just 1 injection into each of 5 points between and over the eyebrows, Dysport blocks the signal from the nerve to the muscles, ultimately resulting in a reduction of muscle activity and temporarily preventing contraction of the muscles that cause frown lines.

For up to four entire months, you could have the look that you love. Dysport® works to block the signal from the nerve to the muscles, resulting in a reduction of muscle activity and temporarily preventing contraction of the muscles that cause frown lines. It's important to note that you should not be treated with Dysport more frequently than every 90 days.

Treatment with prescription Dysport can temporarily improve the look of your moderate to severe frown lines. Treatment generally takes just 10 to 20 minutes, although treatment times can vary from person to person.

Dysport is an acetylcholine release inhibitor and a neuromuscular blocking agent indicated for the temporary improvement in the appearance of moderate to severe glabellar lines associated with procerus and corrugator muscle activity in adult patients less than 65 years of age.

Please read important safety information and full prescribing information, including distant spread of toxin effect boxed warning, at the bottom of the page.

Postmarketing reports indicate that the effects of Dysport and all botulinum toxin products may spread from the area of injection to produce symptoms consistent with botulinum toxin effects. These may include asthenia, generalized muscle weakness, diplopia, blurred vision, ptosis, dysphagia, dysphonia, dysarthria, urinary incontinence and breathing difficulties. These symptoms have been reported hours to weeks after injection. Swallowing and breathing difficulties can be life threatening and there have been reports of death. The risk of symptoms is probably greatest in children treated for spasticity but symptoms can also occur in adults treated for spasticity and other conditions, particularly in those patients who have underlying conditions that would predispose them to these symptoms. In unapproved uses, including spasticity in children and adults, and in approved indications, cases of spread of effect have been reported at doses comparable to those used to treat cervical dystonia and at lower doses.

Dysport is contraindicated in patients with known hypersensitivity to any botulinum toxin preparation or to any of the components in the formulation.
This product may contain trace amounts of cow's milk protein. Patients known to be allergic to cow's milk protein should not be treated with Dysport.
Dysport is contraindicated for use in patients with infection at the proposed injection site(s).

The potency Units of Dysport are specific to the preparation and assay method utilized. They are not interchangeable with other preparations of botulinum toxin products and, therefore, units of biological activity of Dysport cannot be compared to or converted into units of any other botulinum toxin products assessed with any other specific assay method.

Facial Anatomy in the Treatment of Glabellar Lines

Caution should be exercised when administering Dysport to patients with surgical alterations to the facial anatomy, excessive weakness or atrophy in the target muscle(s), marked facial asymmetry, inflammation at the injection site(s), ptosis, excessive dermatochalasis, deep dermal scarring, thick sebaceous skin or the inability to substantially lessen glabellar lines by physically spreading them apart.
Do not exceed the recommended dosage and frequency of administration of Dysport. In clinical trials, subjects who received a higher dose of Dysport had an increased incidence of eyelid ptosis.

Individuals with peripheral motor neuropathic diseases, amyotrophic lateral sclerosis or neuromuscular junction disorders (e.g., myasthenia gravis or Lambert-Eaton syndrome) should be monitored particularly closely when given botulinum toxin.
Patients with neuromuscular disorders may be at increased risk of clinically significant effects including severe dysphagia and respiratory compromise from typical doses of Dysport.

The possibility of an immune reaction when injected intradermally is unknown.
The safety of Dysport for the treatment of hyperhidrosis has not been established.

USE IN SPECIFIC POPULATIONS

Dysport is not recommended for use in children or pregnant women.

You are encouraged to report negative side effects of prescription drugs to the FDA. Visit www.fda.gov/medwatch or call 1-800-FDA-1088.

Jawline shaping with Dysport before and after photos.  Dysport can also be used for reducing teeth grinding and masseter muscle reduction. 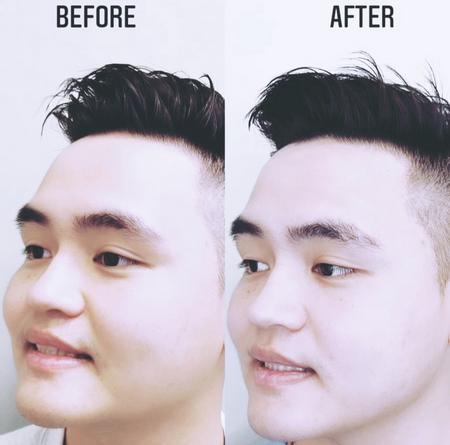